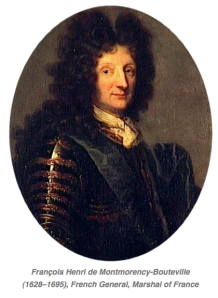 In a purple passage in his once famous History of England, Lord Macaulay referred to ‘the hunch backed dwarf who urged forward the fiery onset of France, and the asthmatic skeleton who covered the slow retreat of England’. The words are part of a florid description of the battle of Landen which took place in July 1693, and resulted in a French triumph. The victorious commander was the Marshal-Duke of Luxemburg, the subject of this book, the vanquished was William, Prince of Orange, Stadtholder of the United Provinces, and King of England, Scotland and Ireland. The preceding two decades had seen many battles contested by armies led by the two, and the title above implies the usual outcome. In total, they were directly opposed in nearly a dozen major engagements, and King William never achieved a victory, though such was his resilience that he was never forced to leave the field for long. He was a towering figure of his age, changing British and European history not least by checking the ambitions of Louis XIV, but it was his fondest wish to be remembered as a great general; he is not, largely because he so often came up against one who was, namely the Marshal-Duke of Luxemburg.

This is an account of Luxemburg’s long and almost entirely successful military career, which began in the train of another great French general, the Prince of Condé, in 1647 and ended in 1694 with a well conducted campaign of manoeuvre, a few months before his sudden death. However, other parts of his life rarely ran smoothly; his deformity has been highlighted in Macaulay’s words, he was born the posthumous son of a minor noble disgraced and executed for duelling, and he spent a considerable part of his life in revolt against the French King, or under a cloud of royal disfavour. King Louis XIV never liked or wholly trusted him, but was forced to employ him because there was no French general of near comparable ability, once the aforementioned Condé and Marshal Turenne had departed the scene.

The book describes Luxemburg’s many battles and campaigns, and seeks to set them in context, because the wars of which they formed a part are not well known to most English speaking readers. Other major episodes of the life are chronicled, especially involvements in the Fronde and the Affair of the Poisons, either of which might ended his career, and even led to a premature death. This is the first biography in English of one of the great generals of the 17th Century.

This work is licensed under a Creative Commons Attribution-NonCommercial-NoDerivs 3.0 Unported License.